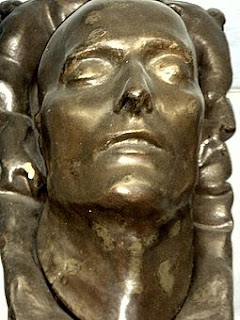 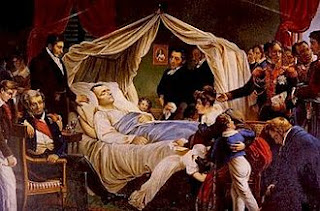 5 May 1821: The death of the Emperor Napoleon Bonaparte on the island of St. Helena on this day. He died surrounded by a small coterie of staff and servants who had gathered together to be with him in his final moments.. They had followed him to this lonely outcrop in the windswept South Atlantic to help him endure his Exile from his adoptive country of France.

Napoleon was born in Corsica in 1769 but had ruled over France and then directly or indirectly over much of western Europe from 1799 until his Downfall in 1814. A legend in his own lifetime & widely regarded as a military genius & one of the finest commanders in history, his wars and campaigns have been studied at military schools worldwide. He fought more than 70 battles, losing only eight, mostly at the end. But as he fought the invading armies of the Allies that year the city of Paris capitulated behind his back and he was forced to abdicate the throne he had placed himself upon. Exiled to the tiny island of Elba off the NW coast of Italy he could not adjust to his lilliputian domain.

The following year he resolved to try his luck once again upon the soil of France. After his brilliant initial success of regaining his throne and raising a fresh army he was defeated at the Battle of Waterloo on 18 June 1815. He once again had to relinquish power and this time gave himself up to the mercy of the English on 15 July of that year . After consultation with their Allies they decided to remove General Bonaparte from Europe completely and dispatch him to St Helena from whence escape was virtually impossible. He arrived there on the HMS Northumberland on 15 October 1815 stepping ashore two days later. He was never to leave the island again as long as he lived.