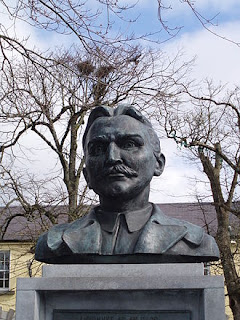 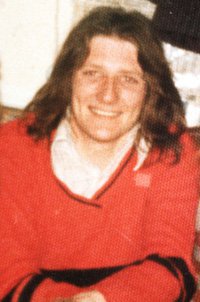 5 May 1916: Major John MacBride was executed on this day. Originally from Mayo he traveled to America in 1896 to further the aims of the I. R. B., thereafter travelling to South Africa where he raised the Irish Transvaal Brigade during the Second Boer War where he saw action against the British Army. MacBride married the Irish nationalist Maude Gonne in 1903 but it was not a success. They had one son the late Sean McBride Human Rights campaigner and winner of the Nobel & Lenin Peace prizes.

The Major was not a member of the Irish Volunteers, but being in Dublin for his brother Anthony's  wedding and upon learning of the beginning of the Rising he offered his services to Thomas MacDonagh. He was at Jacob’s biscuit factory when that post was surrendered on Sunday, 30 April 1916. He freely admitted his part in the Rising and that he fought in Mufti. At his execution he asked not to have his hands tied behind his back, but this was refused. When they did cover his eyes he made a similar request, remarking to the priest: “You know, father, I have often looked down their guns before.”

5 May 1981: Bobby Sands MP for Fermanagh and south Tyrone died in captivity after 66 days on Hunger Strike. His death sparked widespread rioting.

He was born in 1954 in Rathcoole, a predominantly loyalist district of north Belfast. Initially uninvolved he was forced out of his job and in June 1972, the family were intimidated out of their home in Doonbeg Drive, Rathcoole and moved into the newly built Twinbrook estate on the fringe of nationalist West Belfast. He joined the IRA and became a full time volunteer.

In October 1972, he was arrested. Four handguns were found in a house he was staying in and he was charged with possession. He spent the next three years in Long Kesh where he had political prisoner status. Released in 1976 Bobby returned to his family in Twinbrook. He became involved again in the Armed Struggle and was caught in a car with three other men in which was found a handgun. He was held on remand for eleven months until his trial in September 1977. As at his previous trial he refused to recognise the court.

When he was moved to the H-Blocks he went ‘On the Blanket’ and became a spokesman for the prisoners. When the first Hunger Strike was broken in December 1980 and the terms the prisoners believed were promised to them never happened he became determined to lead the next one - even onto death. This was to  ensure the prisoners 5 Demands were secured. He was now O/C in the Blocks and felt compelled to show leadership to the other men in the same predicament as himself.

He began his fast on 1 March 1981. He kept a secret Diary that lasted the first 17 days but then became too weak to continue. On 30 March, he was nominated as candidate for the Fermanagh and South Tyrone by-election caused by the sudden death of Frank Maguire, an independent MP who supported the prisoners' cause. To the surprise of many he won the seat with over 30,000 votes and caused a watershed in Irish Politics. However his situation was precarious as Mrs Thatcher was not for turning and Bobby Sands knew he was probably going to die before she would give in.

The end came in the early hours of 5 May when he succumbed to the effects of his fast on the 66th day of his ordeal.