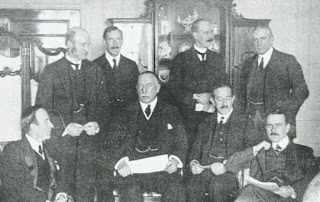 24 May 1921: Elections were held in Six Counties/Northern Ireland on this day. These were held as a result of the Partition of Ireland as implemented by the British under their Government of Ireland Act 1920 which divided the Country into two separate statelets - Northern Ireland and Southern Ireland. In the South the election process was a fiasco as no other Party would take the field against Sinn Fein for seats in its prospective House of Commons and as a result that Party swept the boards as all its candidates had to be deemed elected by the returning officers.
It was a very different situation in the North where opinion was much more deeply divided and Sinn Fein was in contention with the Nationalist Party under Joe Devlin for the votes of basically the Catholic populace. The northern entity came into existence at the beginning of May but without a sitting parliament so this contest was aimed at filling the seats needed to allow it to function as a legislative body.
In the event the Unionist Party dominated the whole proceedings with full control of the Military and Police forces that discouraged if not actively stopped nationalists from exercising their ability to cast their votes.
“Also on election day the Specials, who were the auxiliary police, who were all loyalists, they were very active at the polling stations and they intimidated nationalist and Sinn Féin election workers and people who came to claim their votes in areas in which they had been intimidated (out of their homes during sectarian violence)… You had lots of complaints that Specials were turning nationalist voters away and that the register had been impersonated.”
He added: “You had IRA attacks as well. Violence was raging across Ireland and the IRA began to up the ante towards polling day, bombing barracks like Springfield Road barracks in west Belfast."
Dr Éamon Phoenix quoted in the Irish News 24 May 2021
https://www.irishnews.com/news/northernirelandnews/2021/05/24/news/may-1921-saw-most-violent-election-in-north-s-history-after-partition-came-into-being-2332111/
The results were as follows on a Total electorate of 582,464; turnout: 88.0% (512,842):
Ulster Unionists under Sir James Craig took 40 seats with 343,347 votes [66.95%]
Sinn Fein under Eamon De Valera took 6 seats with 104,917 votes [20.5%]
Nationalists under Joe Devlin took 6 seats with 60,577 votes [11.8%]
https://en.wikipedia.org/wiki/1921_Northern_Ireland_general_election#Votes_summary

As can be seen the results in terms of MPs returned was totally skewed in favour of the Unionist population.

‘Among Republicans elected for constituencies in the Six Counties were President De Valera for South Down, Michael Collins for Armagh, Eoin O’Neill for Derry, and Arthur Griffith Sean Milroy and Sean O’Mahony for Fermanagh South Tyrone....

When the Northern Parliament met on June 7th, the Nationalist Party and Republican members were absent. Later, Joseph Devlin and his followers decided to take their seats; the Republicans, however, continued to abstain.

The Irish Republic by Dorothy Macardle

Photo: James Craig, centre, and members of his cabinet in London in November 1921 while the Treaty negotiations were taking place