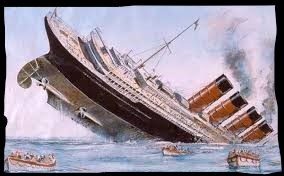 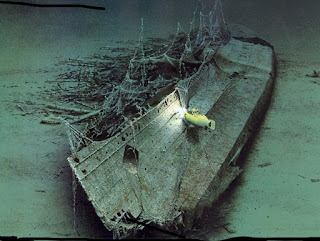 7 May 1915: The liner RMS Lusitania (New York to Liverpool) was torpedoed off the Old head of Kinsale by the German submarine U20 on this day. She sank within 18 minutes. (Two explosions rocked the ship. The first was clearly caused by a torpedo from U-20. The cause of the second explosion has never been definitively determined and remains the source of much controversy.) Of those on board, 761 were rescued, while 1,198 perished, including 115 US Citizens.

On the 7th September 1907 under the command of Captain James B. Watt, the RMS Lusitania sailed on her maiden voyage to New York. She carried over 3,000 passengers and crew. Her passengers were delighted with the new ship. The standards of accommodation and services were well documented. Most third class passengers enjoyed the voyage. Dinning on her was like eating in the best restaurants or hotel anywhere.

In August 1914 World War One broke out. The day of anticipation finally arrived when the British Navy needed the ship for wartime service. The Lusitania had to be refitted for the purpose. Her four funnels were fully painted black to conceal her identity from enemy ships.

On May 1, 1915, the ship departed New York City bound for Liverpool. Unknown to her passengers but probably no secret to the Germans, almost all her hidden cargo consisted of munitions and contraband destined for the British war effort. As the fastest ship afloat, the luxurious liner felt secure in the belief she could easily outdistance any submarine. Nonetheless, the menace of submarine attack reduced her passenger list to only half her capacity.

Following the loss of the Titanic, the Lusitania was fitted with 48 boats (22 wooden and 26 collapsible). Every boat was fitted with 2 chains to anchor them to the deck. This would prove disastrous when the ship sank because the chains would have to be released before the boats could be swung clear of the ship. When the Lusitania was sinking many of the chains were not released and thus preventing the boats from being launched successfully. Many boats went down with the ship.

On Friday 7th May 1915 she had reached the War Zone. The usual precautions of blackening out the portholes and doubling the watch were obeyed.The lookouts were tentatively at their posts. At about 1.30 p.m. Leslie Morton saw the torpedo heading towards the Starboard side travelling at about 22 knots. He gave the alarm stating "Torpedo coming in the Starboard side". The Bridge was slow in reacting to his warnings.Another lookout, Thomas Quinn also said that the torpedo and sounded the alarm. It was too late. The torpedo struck the ship and detonated before Turner could do anything. Power was suddenly lost. The watertight doors could not be closed. Radio distress signals had to be sent using battery power.

At 2.10 p.m. after lunch the passengers were eagerly waiting for their desserts when they heard:

"the sound of an arrow entering the canvas and straw of a target magnified a thousand times" or and "a pearl of thunder" and "the slamming of a door".

A second explosion came within seconds. Suddenly the ship took a 15º list to Starboard, which began to sharpen to 16º then 17º etc until the list reached 25º - a point at which the ship could not survive. The list had become so severe that the Officers could not swing the lifeboats clear of the ship.Panic had set in amongst the passengers. Some jumped into the water trying to flee for their lives. Captain Turner jumped into the water when the Bridge was flooding. He swam for three hours before finding a lifeboat to climb into. Within 18 minutes the ship had rolled over and sunk with 1,195 passengers left aboard. Only 289 bodies were recovered. 764 people survived.

The survivors were landed at Cobh (Queenstown) in Co Cork. It was here too that the bodies were brought ashore or washed up in the days after the sinking. The corpses, men, women and children, were placed in coffins and lined up along the Cunard Line’s dock. A huge funeral procession made its way through the streets of Cobh to the cemetery. Many of the dead were buried in mass graves, marked by two crudely hewn stones. Others victims, likely the more affluent, were buried in individual graves with headstones noting their death on the Lusitania.

.The loss of the Lusitania was to reverberate on the World stage as the USA was shocked and stunned by the actions of the German Navy in sinking what was to all appearances a civilian Liner engaged in peaceful commerce. It pushed US public opinion firmly in the direction of the Allies and helped to bring the USA into the War against Germany in April 1917.