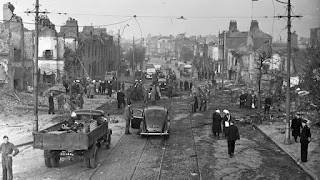 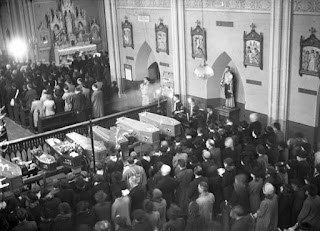 31 May 1941 – The German bombing of the North Strand in Dublin by the Luftwaffe on this day. 28 were killed  & over 90 were injured, over 300 houses were destroyed or damaged in the attack. Smaller bombs damaged the American Embassy and Áras an Uachtarain the official home of President Douglas Hyde in the Pheonix Park. The bombing was in all probability accidental and the German Government apologised in June 1941 for the attack.

The first fifteen burials took place on 4 June  incl. the internment of the tragic Brown family in their native Drumcooley, outside Edenderry Co Offaly . Harry Brown, who lived on the North Strand was a member of the Local Defense Force and was amongst the dead, as was his 65-year-old mother, Mary, his wife Mary (or Mollie as she was known, 32) and their children Maureen (7), Ann (5), Edward (3) and Angela (2).  On the same day the burial of eight more people took place  in Glasnevin and in Dean's Grange cemeteries in Dublin. Twelve of those killed were buried by Dublin Corporation at a Public Funeral on 5 June, at which Government members including Eamon De Valera attended. The service took place in the Church of St. Laurence O'Toole, Seville Place and was presided over by Archbishop McQuaid.

An Taoiseach Eamon De Valera made the following statement in the Dáil on 5 June:

Members of the Dáil desired to be directly associated with the expression of sympathy already tendered by the Government on behalf of the nation to the great number of our citizens who have been so cruelly bereaved by the recent bombing. Although a complete survey has not yet been possible, the latest report which I have received is that 27 persons were killed outright or subsequently died; 45 were wounded or received other serious bodily injury and are still in hospital; 25 houses were completely destroyed and 300 so damaged as to be unfit for habitation, leaving many hundreds of our people homeless. It has been for all our citizens an occasion of profound sorrow in which the members of this House have fully shared.

(Members rose in their places.)

Why these bombers ended up over Dublin is a mystery. Presumably they meant to bomb Belfast or Liverpool, became disorientated and ended up over Dublin where they were spotted by searchlights and fired upon by AA batteries. This probably confirmed them in their belief they were at least over a large urban area of enemy territory and they decided to drop their bombs here to lighten their load and allow them to make greater speed on the run back to their base in Occupied Europe.

After the War the post war Government of West Germany paid compensation for the destruction and the damaged caused. These bombings were the worst experienced in the Irish Free State during the War or ‘The Emergency’ as those times were called here.