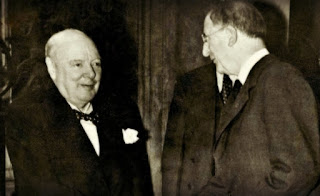 16 May 1945: An Taoiseach Eamon DeValera made his famous reply on Radio Éireann to the speech of British Prime Minister Sir Winston Churchill  a few days earlier in which he disparaged the role of the Irish Free State in the Second World War which had just ended.

In that speech Churchill had cast a cold eye on Mr Eamon De Valera’s role in denying to Britain the naval facilities known as the ‘Treaty Ports’ in the South that he felt they had a right to in time of war & compared it with the Loyalty of the North in the recent Conflict. In his Victory speech he called out the Irish Government:

...the approaches which the southern Irish ports and airfields could so easily have guarded were closed by the hostile aircraft and U-boats. This indeed was a deadly moment in our life, and if it had not been for the loyalty and friendship of Northern Ireland, we should have been forced to come to close quarters with Mr. de Valera, or perish from the earth. However, with a restraint and poise to which, I venture to say, history will find few parallels, His Majesty’s Government never laid a violent hand upon them, though at times it would have been quite easy and quite natural, and we left the de Valera Government to frolic with the German and later with the Japanese representatives to their heart’s content."

This was a jibe that DeValera felt he could not let go unanswered and he took to the airwaves to counter the accusation that Ireland should have actively taken part on Britain’s side in the World War just ended. Some days previous he had called upon the German Legation and commiserated with the German representative here Dr Hempel on the death of the German Chancellor Adolf Hitler. To say this had not gone down well in certain quarters would be something of an understatement! However Churchill had then blundered in seeking to portray Irish Neutrality as something that Britain had the Right to override if it so wanted to do so. To this DeValera replied:

"Allowances can be made for Mr. Churchill’s statement, however unworthy, in the first flush of victory. No such excuse could be found for me in this quieter atmosphere. There are, however, some things it is essential to say. I shall try to say them as dispassionately as I can. Mr. Churchill makes it clear that, in certain circumstances, he would have violated our neutrality and that he would justify his actions by Britain’s necessity. It seems strange to me that Mr. Churchill does not see that this, if accepted, would mean that Britain's necessity would become a moral code and that when this necessity became sufficiently great, other people’s rights were not to count... Surely Mr. Churchill must see that if his contention be admitted in our regard, a like justification can be framed for similar acts of aggression elsewhere and no small nation adjoining a great Power could ever hope to be permitted to go its own way in peace...

Mr. Churchill is proud of Britain’s stand alone, after France had fallen and before America entered the war. Could he not find in his heart the generosity to acknowledge that there is a small nation that stood alone not for one year or two, but for several hundred years against aggression; that endured spoliations, famine, massacres, in endless succession; that was clubbed many times into insensibility, but each time on returning to consciousness took up the fight anew; a small nation that could never be got to accept defeat and has never surrendered her soul?"

His speech had an electrifying effect on Irish public opinion and was seen as a dignified response to Churchill’s ill considered remarks about Ireland. It appears that on mature reflection the British Prime Minister realised he had gone too far and the matter was let drop. Anyway he heavily lost the British General Election in June that year and did not return to Office until 1951 - by which time the Irish Free State had declared itself a Republic and was not even nominally part of the British Empire  - an event that Mr DeValera had nothing at all to do with it!