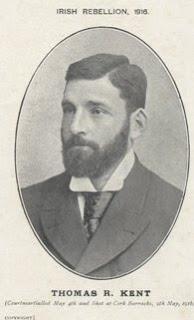 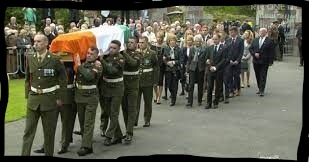 9 May 1916: Thomas Kent/ Tomás Ceannt was executed in Cork Detention Barracks on this day: Born in 1865, Kent was arrested at his home in Castlelyons, Co. Cork following a raid by the Royal Irish Constabulary during which his brother Richard was fatally wounded. It had been his intention to travel to Dublin to participate in the Rising, but when the mobilisation order for the Irish Volunteers was cancelled on Easter Sunday he assumed that the Rising had been postponed, leading him to stay at home.  In 1966 the railway station in Cork was renamed Ceannt Station in his honour.
- See more at: http://www.taoiseach.gov.
When the Kent residence was raided they were met with resistance from Thomas and his brothers Richard, David and William. A gunfight lasted for four hours, in which an RIC officer, Head Constable William Rowe, was killed and David Kent was seriously wounded. Eventually the Kents were forced to surrender, although Richard made a last minute dash for freedom and was fatally wounded.
Along with Roger Casement he was the only other person to be executed outside of Dublin for their part in the Easter Rising.
In September 2015 he was given a State funeral  after his remains were identified via DNA genetic testing thanks to samples supplied by Kent family descendants still living in the Castlelyons and Fermoy areas of north Cork. Following the requiem mass, Thomas Kent, who was 50 when he was executed, was buried in his family's crypt alongside the remains of his brothers William, Richard and David.