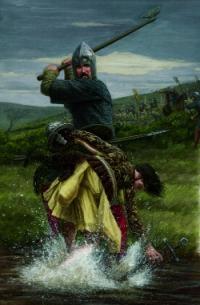 8 May 1567: The Battle of Farsetmore was fought near Letterkenny in County Donegal on this day. The battle was fought between the rival armies of Shane O’Neill of Tir Eoghan (Tyrone) and Aodh O'Donnell of Tir Connell (Donegal). Each side probably had about 2,000 men apiece. The battle began when O'Neill's cavalry crossed the ford at Fearsad-Suilighe at low tide.

Aodh O'Donnell, gathered with his band of loyal followers around the little hill fort of Ard-an-ghaire, dispatched his son, also called Aodh, to hold them as long as he could. The father was expecting reinforcements that very day and if he could just hold back O'Neill's army until he could assemble a force to near match the invaders he would be in with a chance. With his son locked in combat with the van of O'Neill's force he took the opportunity to fall back behind the shelter of a bog across which O'Neill's men could not advance but at a disadvantage.

After a vicious fight in which a number of leading men on both sides fell, young Aodh could hold his position no longer and pulled back to join his father behind the bog. But by then relief was at hand as three war bands of Gallowglass mercenaries drawn from the McSweenys came up to support Aodh O'Donnell in his hour of need.O'Donnell saw his opportunity and without further ado launched his whole force upon O'Neill's men, who were possibly still forming up into a line of battle.

Fierce and desperate were the grim and terrible looks that each cast at the other from their starlike eyes; they raised the battle cry aloud, and their united shouting, when rushing together, was sufficient to strike with dismay and turn to flight the feeble and the unwarlike. They proceeded and continued to strike, mangle, slaughter, and cut down one another for a long time, so that men were soon laid low, heroes wounded, youths slain, and robust heroes mangled in the slaughter.

How long this brutal melee lasted we do not know but eventually O'Neill's army was forced back onto the riverline and there it buckled and disintegrated into fragments. Then O'Neills men fled for their lives. However the sandy tidal ford they had crossed that morning in the expectation of Victory was now filled with the waters of the swiftly advancing tide. There was no way out but to try their luck in the treacherous waters, encumbered as they were by their weaponry and armour. Hundreds were cut down or drowned as they sought the safety of the other bank.

As light faded Aodh O'Donnell had won a great victory over the men of Tir Eoghan with perhaps as many as 1300 of his enemies either drowned or dead on the field of battle.*

Shane O'Neill was turned within the course of a single day from being the most powerful Chieftain in the North into a desperate fugitive fleeing for his life. He had lost some of those dearest to him in this catastrophe: two of his grandsons, plus MacDonald, the leader of his Gallowglasses, and Dubhaltach, his foster brother and 'the person most faithful and dear to him in existence'

As fortune would have it Shane had recruited some of the O'Gallagers of Tir Connell onto his side and with their local knowledge he was able to evade his pursuers by turning upstream to Scarrifhollis and then ride for home.When he got back he found his support base collapsing around him and turned in desperation to the Mac Donald's of Cantire in Scotland under Alexander to support him. The Mac Donald's were old enemies so it was a strange place to seek Allies but they came anyway to see if they could cut a deal. They met up at Cushendun in Antrim. Whatever happened when they initially met things soon turned sour and a fight broke out. Shane was cut down and put to the sword. His body was flung in a pit and his head dispatched to Dublin for display on the Castle Walls. So ended the colourful and dramatic career of Shane O'Neill, a man who was a thorn in the side of the English for many years and was both respected and feared by all, Irish or Foreign, whom he clashed with.

Queen Elizabeth I of England stated:

'that we give thanks to Almighty God by whom we hold and rule all that we enjoy, for his goodness and favour shown in the punishment and extinguishing of such a rebellion so long continued'

* A report to the English  Lord Deputy Sidney in Dublin stated that 613 men were counted dead on the battlefield. Many others must have drowned in the waters and been swept away

An artist’s impression of an O’Donnell gallowglass dispatching an O’Neill kern in the waters of the Swilly, with Glebe Hill in the background, 8 May 1567. (Seán Ó Brógáin)