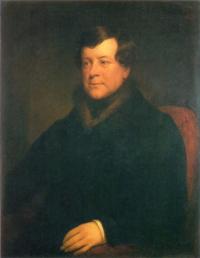 15‭ May 1847: The death of Daniel O’Connell  ‘The Liberator’ at Genoa in Italy while making his way to the Holy City of Rome on this day. He died at 9.35 p.m. in the evening. His heart was taken on to Rome (now lost) and his body was returned to Dublin for internment in Dublin’s Glasnevin Cemetery. He tomb was eventually capped by a replica Irish Round Tower that is the locus of the necropolis and is still visited by thousands of people every year.

On May‭ 15, 1847, Father Miley, O'Connell's companion on his last journey, wrote from Genoa:

“The Liberator is not better. He is worse – ill as ill can be. At two o'clock this morning I found it necessary to send for the Viaticum and the holy oil. Though it was the dead of night, the cardinal archbishop (he is eighty-eight years old), attended by his clerics and several of the faithful, carried the Viaticum with the solemnities customary in Catholic countries, and reposed it in the tabernacle which we had prepared in the chamber of the illustrious sufferer. Though prostrate to the last degree, he was perfectly in possession of his mind whilst receiving the last rites. The adorable name of Jesus, which he had been in the habit of invoking was constantly on his lips with trembling fervour, His thoughts have been entirely absorbed by religion since his illness commenced. For the last forty hours he will not open his lips to speak of anything else. The doctors still say they have hope. I have none. All Genoa is praying for him. I have written to Rome. Be not surprised if I am totally silent as to our own feelings. It is poor Daniel who is to be pitied more than all.”

He was the greatest Irish political figure of the 19th century but curiously not the most revered. A great orator and a man of impressive appearance and political acumen he was considered too cute by half by both allies and opponents. However he rose a People off their knees and showed that it was possible to build a mass political movement in Ireland that could only be defeated when faced by Force of Arms and not the Force of Argument.