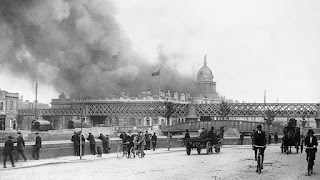 25 May 1921- The Custom House in Dublin was burnt out by members of the Dublin Brigade IRA. In an audacious and well planned operation some 200 IRA members seized control of the Custom House building on Dublin’s North Quay and set it alight. The purpose of the raid was to destroy the Local Government records of the British Administration in Ireland in order to further undermine their ability to rule the Country.

The Operation had been decided upon by the senior members of the Republican Movement at the time incl. Michael Collins and Eamon De Valera. It was hoped that such a devastating blow would undermine British rule to such a degree that it would never recover it ability to collect taxation at local level.

The 2nd battalion Dublin IRA was tasked with carrying out the Operation. ‘The Squad’ made up of hitmen was to eliminate any one who tried to interfere. The 5th battalion was to cover them from without. Vincent Byrne, a member of the execution gang ‘the Squad’ attached to Michael Collins Intelligence Department recalled:

'However a 25 May IRA attack on the Customs House in Dublin made it clear that the advocates of continued force within the Irish Independence movement were more than content to keep the fight going. The attack, waged largely by the Dublin Brigade's 2nd Battalion, marked the largest armed deployment by the rebel forces since the Easter Rising. With some 200 men involved in all, the attack in retrospect might be judged to have been as foolhardy for the IRA as it was dramatic in scale. While the objective of damaging the Customs House and destroying thousands of tax records was achieved, in all the attack resulted in the loss of some seventy-five members of the Dublin Brigade due to arrests at the scene and the deaths of six others...

The objective for attacking the Customs House in fact dated back to the end of 1918, when the Irish Volunteers devised a plan for the building's destruction if and when the British Government imposed conscription on Ireland. Byrne also recalled his role in the attack and subsequent escape.

I got a tin of petrol and proceeded to the second floor. I opened the door and sitting inside there were a lady and a gentleman, civil servants having tea. I requested them to leave, stating that I was going to set fire to the office. The gentleman stood up and said 'Oh, you can't do that.' I showed him my gun and told him I was serious. . . The lady then asked me if she could get her coat, and I replied: 'Miss, you'll be lucky if you get out with your life.'

So while the immediate objective was achieved the operation was a costly one for the IRA as many of its top operatives were captured. The building was quickly surrounded by the Auxiliaries of the RIC who while ruthless were all combat experienced men. Many of the Volunteers were unable to effect their escape in time and were captured. However the IRA stopped Dublin Fire Brigade from reaching the scene until the building was well ablaze. Five members of the IRA died as a result of the operation and four civilians were killed either willfully or accidentally incl. the caretaker of the House as he tried to phone for help.

The operation was a spectacular success but it came at a high cost in men lost through death or capture and it could be said it was something of a Pyrrhic victory for the Dublin Brigade of the IRA. In the event the Truce was only weeks away & despite subsequent criticism they were to keep up the tempo of attacks within the City until a ceasefire was agreed in 2nd week of July.