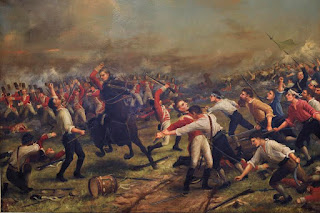 27 May 1798: The Battle of Oulart Hill on this day. A  force of some 100 soldiers of the British Army was all but eliminated by the Wexford insurgents at Oulart Hill in that County. They had been dispatched from Wexford town to intimidate any actions by the disaffected countrymen of the locality who were taking to arms to defend themselves from the depredations of the Military. Columns of them were scouring the countryside, burning people out of their homes and murdering people whom they believed to be ‘Rebels’ against King George III.

‘By mid-afternoon on Whitsunday, 27 May, having done a circuit of the district to gather their supporters, Fr. John Murphy, Curate of Boolavogue, United Irish Col. Edward Roche, Morgan Byrne of Castlesow and George Sparks of Blackwater assembled their men on Oulart Hill, in what appears to have been the implementation of an existing plan familiar to all. It was probably the original plan for raising North Wexford as part of the general national Rising that had collapsed in Dublin the previous Wednesday night. All the gunsmen along with perhaps 300 of the pikemen and men with sundry weapons were placed in a right-angled ambush on a corner and along its subtending ditches (fences).

Government forces comprised 126 officers and men of the North Cork Militia (infantry) under Lieut. Col. Foote and Major Lombard supported by nineteen officers and men of the Shelmalier Yeoman Cavalry under Col. Le-Hunte. Almost half this latter body had been brought over to the rebel cause during the night by General Edward Roche who was Sergeant in the corps.'

The Battle of Oulart Hill, Context and Strategy by Brian Cleary.

There was consternation in Wexford when news reached the town as the loss of this body of  troops left in almost defenseless. The Deputy Mayor wrote to Dublin appealing for help:

This has turned out a most unfortunate day. A party of rebels appearing in great force a few miles from Wexford, on the Dublin road were attacked by the grenadier company and other picked men to the amount of hundred of the North Cork Militia. The Major, four or five officers and all the party except three were cut off. Of the Officers Col. Foote only escaped. The Rebels, confident in their strength and flushed with their success are determined on the attack of the town of Wexford. By the loss of this day are numbers are so reduced that we much fear the event and request most earnestly that you will order such a reinforcement as may be sufficient to oppose them.

The elimination of a full column of the Crown Forces by the men of the locality spread like wildfire throughout the County and further afield. It was indeed the spark which set the Wexford Rising off as it’s highly unlikely that a defeat here would have had any other outcome but a collapse in the morale of those in arms against the Crown and a hasty end of the whole affair.