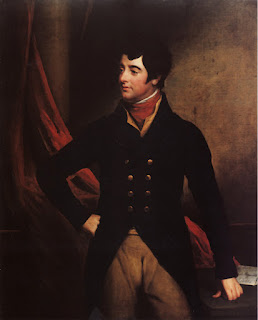 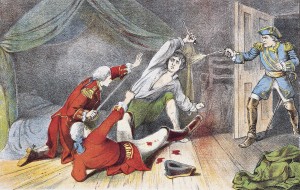 19 May 1798: Lord Edward Fitzgerald was shot and arrested at the home of the Merchant NicholasMurphy at whose house (now 151 Thomas Street, Dublin) he was taking refuge in.

Lord Edward Fitzgerald was a most unlikely 'Rebel'. He was born on 15 October 1763 at Carton House, Co Kildare, one of the most prestigious stately homes in the Country. He was the son of the Duke of Leinster, the most senior Aristocrat in Ireland. He was later brought up at Frascati House, Blackrock, Co Dublin.

He received a Commission in the British Army at an early age and served with the distinction in the American Revolutionary War with the 19th Regiment of Foot in South Carolina, taking part in the Battle of Eutaw Springs (1781) where he was wounded.

In 1783 FitzGerald returned to Ireland, where his brother, the 2nd Duke of Leinster, had procured his election to the Irish Parliament as a Member for Athy, a seat he held until 1790. He represented then Kildare County from 1790 to 1798. He continued his Army career and served in Canada and then travelled extensively across eastern Canada and down the Mississippi before sailing for home through New Orleans.

However it was the events of the French Revolution that proved the turning point in his life. In 1792 he went to Paris and stayed with Thomas Paine. He sat in the observers gallery to listen to the debates of the French Convention and was impressed with what he heard. While there he married Pamela, who was the love child of Madame de Genlis herself by Louis Philippe II, Duke of Orléans. The future King of the French, Louis Phillipe, was among the witnesses.

At a convivial gathering on the 18 November, after the French victory at Jemappes, he offered at a public dinner a toast to: ''The armies of France: may the example of its citizen soldiers be followed by all enslaved countries, till tyrants and tyrannies be extinct.'' He also proposed a toast to “the speedy abolition of all hereditary titles and feudal distinctions”, and gave proof of his zeal by expressly repudiating his own title. For his actions in Paris he was cashiered from the British Army.

On his return to Ireland his views both private and public became more Radical. However he did not join the revolutionary United Irishman until 1796 when he quickly immersed himself in the military plans for a Rising. He traveled as far as Hamburg to secure funds and military assistance from the French. Some of the United Irishmen wanted to wait until this was guaranteed but Lord Edward was of the opinion that it was better to strike sooner rather than later.

By early 1798 it was obvious that further delay would prove fatal and a Rising must come soon. The British Government was using forceful methods to disarm people of any weapons they might have that could used against them. However Martial Law had not yet been declared. The forces of the State also ran a very effective network of spies and informers that had infiltrated the United Irishmen or those who were on familiar terms with them.

On 23 March the military swept on the Dublin Committee of the revolutionaries and captured nearly all of them. Forewarned Lord Edward escaped the net but was now a hunted man.

In the aftermath the British declared Martial Law and it could be only a matter of time till things exploded. In response the date for the Rising was brought forward to be launched on 23 May 1798.

However on 9 May, with Lord Edward till at large, a bounty of £1,000 was put on his head for information leading to his capture - a huge sum in those days.Lord Edward was hiding in Thomas Street, Dublin but had just been involved in a skirmish with his pursuers and it was decided that his original place of refuge must have been compromised. He then moved on the night of the 18th to the home of the Feather Merchant Nicholas Murphy at what is now 151 Thomas Street. He was ill and under the weather but at breakfast the next morning was seen to recover. Murphy was apprehensive of having such a well known fugitive under his roof and (rightly) feared that his betrayal and arrest was only a matter of time.

That evening, at around 7pm Murphy went to Lord Edward's room to call him down for tea and remembered:

He was in bed. It was, at this time, about seven o’clock. I asked him to come down to tea. I was not in the room three minutes when in came Major Swan and a person following him with a soldier’s jacket, and a sword in his hand; he wore a round cap. When I saw Major Swan, I was thunderstruck. I put myself before him, and asked his business. He looked over me and saw Lord E. in the bed. He pushed by me quickly, and Lord E., seeing him, sprang up instantly and drew a dagger which he carried about him, and wounded Major Swan slightly, I believe. Major Swan had a pistol which he fired without effect; he immediately turned to me and gave me a severe thrust of the pistol under the left eye, at the same time desiring the person that came in with him to take me into custody. I was immediately taken away to the yard ; there I saw Major Sirr and about six soldiers of the Dumbarton Fencibles.

Major Swan thought proper to run as fast as he could to the street, and I think he never looked behind him till he got out of danger, and he was the parading the flags, exhibiting his linen, which was stained with blood. Mr. Ryan supplied Major Swan’s place and came in contact with Lord E., and was wounded seriously. Major Sirr at that time came upstairs and keeping a respectful distance, fired a pistol shot at Lord E., in a very deliberate manner, and wounded him in the upper part of the shoulder. Reinforcements coming in, Lord E., surrendered after a very hard struggle. Lord Edward was imprisoned in Newgate....

Lord Edward had fought like a lion against those sent to lead him into captivity, killing Captain Ryan and wounding Major Swan. However with him badly outnumbered by men in arms his heroic defense could only last but a short time. Desperately wounded in the struggle he was taken in a closed sedan chair first to Dublin Castle and then to prison. There he lingered for a number of days in agony as septicemia took its toll. He died on the 4th of June 1798 as the Rising he had so long planned for was well underway.

Thus died one of the bravest of men, from a conviction, I believe, that he wished to ameliorate the condition of his country.

Lord Edward’s remains were placed in a vault under the East end of St. Werburgh’s Church in Dublin, near to the house he was taken in.

Years later the outcome that Murphy had feared was finally revealed - Betrayal!

The two informers implicated in the betrayal of Lord Edward were Francis Higgins (proprietor of ‘The Freeman’s Journal’), at that time a paper in the interest of Dublin Castle, the seat of British rule in Ireland, and Francis Magan, M.A., Barrister at Law. On the 20th of June 1798, Francis Higgins was paid his reward of £1,000 for Lord Edward’s capture.