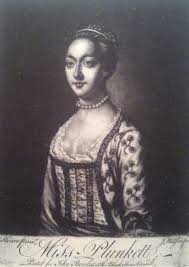 17 May 1797: The death of ‘Peg Plunkett’ in Dublin was reported on this day. Her journey through this Life was not an easy one but nevertheless it was one of her own choosing. She at an early age chose the profession of prostitution as her path to riches. She was the most famous ‘Madame’ of 18th century Dublin who wrote a sensational set of memoirs of her life.

Originally from Killough in Co. Westmeath she was christened Margaret and when her father and mother died she fell under the dominating will of her brother who abused her. She took leave of the family home and headed up to Dublin to seek her fortune. After a series of liaisons she took up with a Mr Leeson Wine Merchant whose name she took even though they never married. ‘Peg Plunkett’ was a later adoption to cover her real identity.

Dublin in the middle of the 18th Century was a rapidly expanding City with a burgeoning population. The metropolis was a mixture of great wealth and great poverty. A girl like Margaret with no connections faced limited choices as to how to make her way in the world. The choice she made was not an uncommon one for a girl of wit intelligence and beauty which she apparently was. She took up living with various wealthy men as their mistress. But the lure of ready money proved too big a temptation for her and she sold herself readily to those with the means to pay for her charms.

Eventually after years of being reliant on others to put a roof over head ‘Peg Plunkett’ decided that it was more lucrative to provide for her own accommodation and ply her Trade from there. While better than the Streets it was still a shoddy life. Her first establishment, run in partnership with friend and fellow-courtesan Sally Hayes, was in Drogheda Street. However her Brothel was vandalized by the Pinking-dindies – a group of high class rabble rousers. She then moved to Wood Street, before settling, most notoriously, in Pitt Street, on the site of the present Westbury Hotel, just off the then as now fashionable Grafton St in Dublin’s City Centre.

As well as the rich (a Bank of Ireland Governor and a Lord Lieutenant were among her clients), she served lawyers, theatre-folk and petty villains amongst others. She refused service to the Earl of Westmorland because he treated his second wife ‘shabbily’, and she insulted the Prince Regent twice whilst visiting London. After 30 years she decided to reform but found her cache of IOUs valueless and ended up in a debtors’ prison, run by a former client, Captain Mathews. To raise cash she decided to publish her memoirs, documenting her life as a madam and the vicissitudes of her later life. Her end though was a rather sordid one as she was apparently gang raped when in her 60s and eventually died of venereal disease.