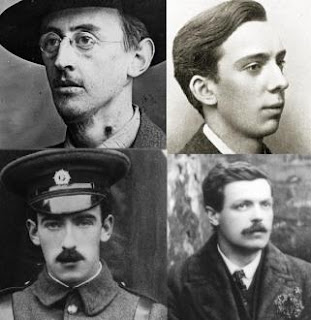 4‭ ‬May 1916 -  Joseph Mary Plunkett, William Pearse, Edward Daly &  Michael O’Hanrahan, were executed by firing squad in Kilmainham Jail Dublin on this day. This was the second batch of prisoners to be shot and further increased public disquiet about the manner in which General Maxwell was handling the aftermath of the Easter Rising.

Joseph Mary Plunkett‭ was a seriously ill man by this stage and had only left hospital days before the Rising in order to take part in it. Plunkett was one of the original members of the IRB Military Committee that was responsible for planning the Rising and it was largely his plan that was followed. He spent the Rising in the GPO.He traveled to Germany to meet Roger Casement before returning home to implement the plan to initiate a Rising. He famously married his sweetheart Grace Gifford hours before his execution in his prison cell. He was one of the signatories of the Proclamation.

William Pearse was Padraig Pearse’s younger brother and played only a minor part in the GPO during Easter Week. He was shot because of who he was rather than anything he did.

Edward "Ned" Daly  was commandant of Dublin's 1st battalion in the Four Courts during the Rising. He was the youngest man to hold that rank and the youngest executed in the aftermath.

Michael O’Hanrahan was second in command of the 2nd battalion under Commandant Thomas McDonagh (executed). He fought at Jacob's Biscuit Factory.