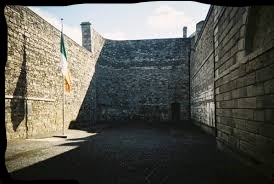 3‭ May 1916 – Padraig Pearse, Thomas Clarke and Thomas MacDonagh were executed at dawn  by firing squad on this day. They were shot in the stonebreakers yard [above] of Kilmainham Jail, Dublin on the orders of General Maxwell.

‭Pearse, MacDonagh and Clarke were all shot minutes apart by a firing squad of British soldiers drawn from the Sherwood Foresters Regiment. They were commanded by a Major Rhodes. As far as we know all died bravely but while Pearse wished to die and Clarke reckoned execution was better than imprisonment again at the hands of the British it was a different story for McDonagh as he left a wife and young family behind him.

We paraded at the time appointed, marched to Kilmainham Jail. At 3.45 the first rebel MacDonoghue [Thomas MacDonagh] was marched in blindfolded, and the firing party placed 10 paces distant. Death was instantaneous. The second, P.H. Pierce [Pádraig Pearse] whistled as he came out of the cell (after taking a sad farewell of his wife.) [Pearse wasn’t married, and was visited only by a Capuchin priest, Fr Aloysius.] The same applied to him. The third, J.H. Clarke [Tom Clarke], an old man, was not quite so fortunate, requiring a bullet from the officer to complete the ghastly business (it was sad to think that these three brave men who met their death so bravely should be fighting for a cause which proved so useless and had been the means of so much bloodshed).

The 1916 Diaries, published by Mercier Press

After their deaths had been confirmed the bodies were quickly transported to Arbour Hill prison where their remains were buried in quicklime. They were the first of 16 men to be executed for their part in the Rising. But their deaths rather than suppressing dissent ignited it and lit the spark that turned them from ‘rebels’ into Heroes.