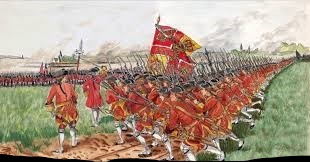 11 May 1745: The battle of Fontenoy was fought on this day. It occurred in what was then part of the Austrian Netherlands but is now in present day Belgium. The French under Marshal De Saxe defeated the British - Dutch Army under the Duke of Cumberland.

The Allied Army was on the advance to relieve the siege of Tournai when they encountered the French under Marshal De Saxe drawn up in prepared positions. In all the French army numbered 93 battalions, 146 squadrons and 80 cannon, some 70,000 troops, of which 27 battalions and 17 squadrons were left to cover Tournai. In support of this position was a reserve of picked infantry and cavalry regiments, including the Irish Brigade, the “Wild Geese’’.

Cumberland reconnoitered the French position on 10th May and decided to pin down the French right wing by attacking with the Austrian and Dutch contingents between Antoing and Fontenoy. While these attacks were being made the British and Hanoverians would advance between Fontenoy and the Bois de Bary across what appeared to be open ground. His so called ‘Pragmatic Army’ comprised 56 battalions of infantry and 87 squadrons of cavalry supported by 80 cannon, in all around 53,000 men.

The French Army however put up a formidable defence and the Allies found the advance heavy going, taking many casualties as they attempted to break their opponents line. But Cumberland pressed on and eventually forced his way into the centre of the French position. The troops opposing him began to buckle. It was the critical moment of the battle.

It was at this point that Marshal De Saxe unleashed his reserve who enveloped the flanks of the British Column. The Irish Brigade (approx. 4,000 men) and dressed in Redcoats was in the thick of it, the men fired up by thought of revenge against their Country’s Oppressor. The Irish Regiments advanced upon the British lines to the cry: 'Cuimhnigidh ar Liumneac, agus ar fheile na Sacsanach’ – ‘Remember Limerick and British faith!’

It consisted that day of the regiments of Clare, Lally, Dillon, Berwick, Roth, and Buckley, with Fitzjames' horse. O'Brien, Lord Clare, was in command. Aided by the French regiments of Normandy and Vaisseany, they were ordered to charge upon the flank of the English with fixed bayonets without firing…

The fortune of the field was no longer doubtful. The English were weary with a long day's fighting, cut up by cannon, charge, and musketry, and dispirited by the appearance of the Brigade. Still they gave their fire well and fatally; but they were literally stunned by the shout, and shattered by the Irish charge. They broke before the Irish bayonets, and tumbled down the far side of the hill disorganized, hopeless, and falling by hundreds. The victory was bloody and complete. Louis is said to have ridden down to the Irish bivouac, and personally thanked them…

George the Second, on hearing it, uttered that memorable imprecation on the penal code, 'Cursed be the laws which deprive me of such subjects.' The one English volley and the short struggle on the crest of the hill cost the Irish dear. One-fourth of the officers, including Colonel Dillon, were killed, and one-third of the men. The capture of Ghent, Bruges, Ostend, and Oudenard, followed the victory of Fontenoy."

By A. M. Sullivan

It was the Irish Brigade’s most famous Victory - though it came at a high cost, with hundreds of men dead and wounded. The Pragmatic Army lost almost 10,000 men, while the French suffered between 6,000-7,000 casualties.