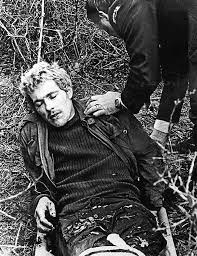 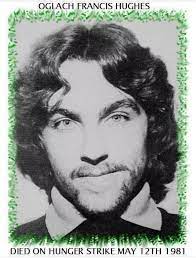 12 May 1981: The death of Frankie Hughes, IRA Volunteer & Hunger Striker on this day. Hughes was the 2nd man to die after Bobby Sands and his passing marked the end  of one of the Crown Forces most formidable opponents in the course of the Conflict. He was born in Bellaghy Co Derry in 1956 to large and Republican family. He left school at 16 to become a painter and decorator but after an encounter with a UDR patrol in which he was badly beaten he decided to join the IRA, initially the Official IRA and then the Provos.

He operated in classic guerrilla warfare style using the countryside rather than an urban environment to launch attacks on UDR, RUC & British Army targets. He dressed openly in a Beret and military style fatigues and stayed under cover in the hours of daylight.

He led a life perpetually on the move, often moving on foot up to 20 miles during one night then sleeping during the day, either in fields and ditches or safe houses; a soldierly sight in his black beret and combat uniform and openly carrying a rifle, a handgun and several grenades as well as food rations.

After taking part in the shooting dead of two members of the RUC in 1977 he was declared the North’s ‘Most wanted Man’ by the them. On the 17 March the following year he was involved in a night time clash with members of the SAS in which one of them was killed and he was severely wounded. He lay all night in a thorn bush hoping to avoid discovery but as dawn broke he was captured and taken prisoner.

'In February 1980, he was sentenced to a total of 83 years in prison. Hughes was tried for, and found guilty of, the murder of one British Army soldier (for which he received a life sentence) and wounding of another (for which he received 14 years) in the incident which led to his capture, as well as a series of gun and bomb attacks over a six-year period. Security sources described him as "an absolute fanatic" and "a ruthless killer". Fellow republicans described him as "fearless and active".'

When the 2nd Hunger Strike began in early 1981 he joined it and died after after 59 days without food. His cousin Thomas McElwee was to become the 9th man to die in the Hunger Strikes that year.