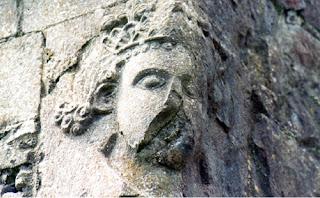 28 May 1224 AD: Cathal Crovderg [‘Redhand’] O'Conor, king of Connacht, son of  the High King Turlough and brother of Rory O'Conor (the last 'High King' of Ireland), died at the age of 72 years. He was the last of the great Irish Kings. His left hand was disfigured by a red birth-mark (the subject of early modern folk stories), which gave him his sobriquet ‘Crobderg’ (Red-hand). He is said to have been fostered by the Uí Diarmata, local rulers in Co. Galway.

'We feel sure that you have heard, through the trusty men and counsellors of your father and your own, how that we did not fail to give faithful and devoted service to the Lord John, your ather of happy memory ; and since his death, as your trusty servants stationed in Ireland know and have learned, we are not failing to give devoted obedience to you, nor do we wish ever as long as we live to fail you. Wherefore, although we possess a charter for the land of Connacht from the Lord your father given to ourselves and our heirs, and by name to Od [Aedh] our son and heir...'

LETTER FROM CATHAL "CROVDEARG" O'CONOR, KING OF CONNACHT, TO HENRY III, circa 1224

Taken from A History of Ireland by Eleanor Hull

His eulogy in the Annals of Connacht relates the attributes that a true King was expected to portray to his People:

the king who best established peace and tranquility of all the kings of Ireland;

When Cathal died he was buried at Knockmoy the Cistercian Abbey to the south of Tuam in East Galway which he had founded. He was buried there with his wife, Moy (Mór), who had died in 1217. He was succeeded in the kingship by his son Áed. Cathal styled himself as Kathaldus Rex Conacie,‘king of Connacht’, and is often regarded as the last ‘great’ king of Connacht. But with his  death the door was open for the Normans to fully occupy the province and rule over it’s inhabitants by supplanting the Gaelic World with  their own feudal laws & customs.